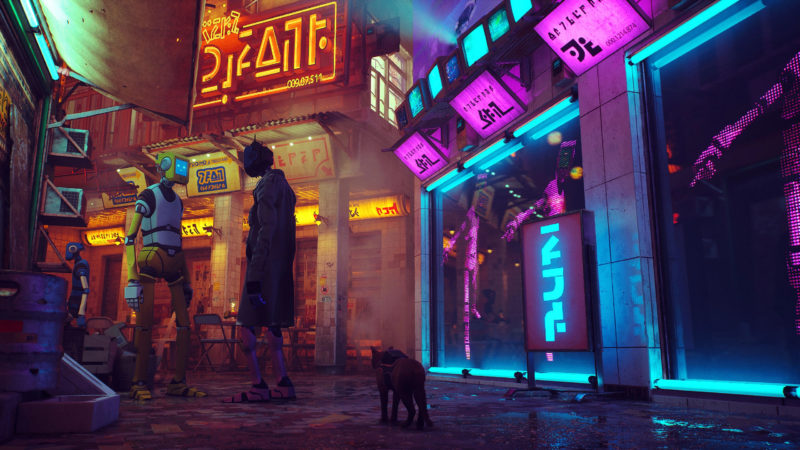 Stray System Requirements – Stray is a third person adventure game of a cat. It is an Indie game that is developed by BlueTwelve Studios and published by Annapurna Interactive. It features a single player campaign and supports all gaming controllers as well.

The story revolves around a cat who is lost and got seperated from its family and will seek out on an adventure to escape the city. The game is set in a very detailed futurisitic cyber city and features beautiful locations like the neon lit alleys and the murky environments. You can roam around the whole city swarming with dangerous threats and creatures.

It is a very interesting game as you will be seeing through the eyes of a cat and can interact with the nearby environments like a real life cat would do. You will also encounter and become friends with a flying drone called the B12 who will be your companion during your whole journey.

Can I run Stray? As said before, the game features beautiful locations, and from the trailers and the gameplay videos we have seen, we think that this Indie game is not going to be so taxing on your system. But as said, not everyone has a high-end gaming PC that can run the latest AAA games. And especially nowadays, because of bitcoin mining, the prices of the Graphics cards and the other components have gone up.

However, this title is not so demanding but still matches your system requirements with Stray’s minimum requirements once before buying this game. So this article will guide you about the Stray PC Requirements and discuss whether you can run it or not.

Here are the minimum and the recommended PC requirements to run the Stray Cat game.

Can I Run Stray cat game?

From the PC Requirements shared to us by the developers, we think that the game is not going to be so heavy. The minimum system requirements features a Core i5 2nd Gen Processor or an AMD FX Processor which both comes from the DDR3 era. This implicates that anyone who have built a PC within 5 years should be able to play this game that includes if you have a better processor than the one referred.

A 2GB Graphics card would get this game running for you. The minimum requirements includes an AMD R7 360 2GB or a GTX 650Ti 2GB. On the latest Steam Hardware surveys, most of the gamers nowadays are using either the 1050Ti or 750Ti, which is great for running this game at medium to high settings. Since the GPU requirements are not much, this title is surely going to be an attention grabber and would run great on your system.

The developers did a great job keeping both the RAM and Storage Requirements low. For both the minimum and recommended systems, they have the RAM requirement at 8GB while keeping the storage at 10GB, which is great because it would encourage gamers to run this game on their SSD and have much faster loading times and a better experience overall.

Although you will be needing at least a Windows 10 64bit to run this game. Older versions of Windows wont run this game at all. A stable internet connection is a must for every game and you should have a Direct X Compatible soundcard installed.

I think Stray is going to be a great hit among Indie lovers as it already loved and praised by game critics worldwide. Double-check your system specifications with the listed requirements to have a rough idea about the performance you might expect out of the game. Yes, you can also refund the game using the Steam Refund Policy if you have not played the game for more than 2 hours.

So this was all about Stray System requirements. If you have something to add, feel free to comment down below. Also, keep an eye on Xombied Gaming for more guides and fixes!