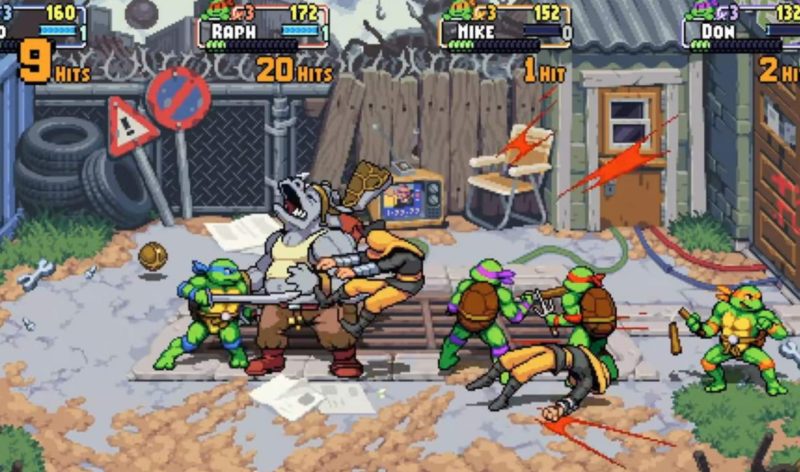 Developer “Tribute Games”, publisher “Dotemu”, and “Gamera Games” is back with the four Ninja Turtles. This time, Leonardo, Michelangelo, Donatello, and Raphael are back again and presented us with their new type of 2D Side Scrolling Action . This action-adventure game belongs to an Indie genre and it aims to deliver new experiences to the player and Teenage Mutant Ninja Turtle fans.

The TNMT Shredders Revenge Game features some groundbreaking gameplay rooted in classic time. Players will be offered to bash their way through some impressive artistic environment levels and face massive numbers of enemies. Players can choose any turtle according to their own choice. The four turtles will feature different powers, moves, finishing styles, combat actions, and abilities. And in co-op mode, you can make the team and simultaneously play with all the playable characters at a time

This game has different types of Evil villain characters, which you must defeat for the story mode game progression. And one of the deadly and dangerous evil characters you will face in the game is Rocksteady. This Rocksteady is an anthropomorphic Rhinoceros that you must defeat in level 7.

So in this article, we are going to guide and help you on how to beat Rocksteady Boss in TMNT Shredder’s Revenge Game.

How to Beat Rocksteady Boss in TMNT Shredder’s Revenge Game

As we said before, you can find this Rhinoceros Villain in level No7, named “Roof Running Reptiles”. This powerful character has 4 separate attack styles in this game, kicking, throwing grenades, long-range firing weapons, and close-range charged attacks.

So the tactic is to avoid his continuous charge attacks at the close range and jump or dodge the ranged and grenade throwing attacks. Rocksteady will be stunned for a bit of time after his charged attack. This is the perfect opportunity, use your special episode, and he will lose most of his health. And while he kicks, you can counter those without losing a single health drop. So make your perfect plan, whether playing alone or with your friends, to defeat Rocksteady boss in TMNT Shredder’s Revenge Game.

So this was all about How to beat Rocksteady boss in TMNT Shredder’s Revenge Game. If you have something to add, feel free to comment down below. Also, keep an eye on Xombied Gaming for more guides and fixes!