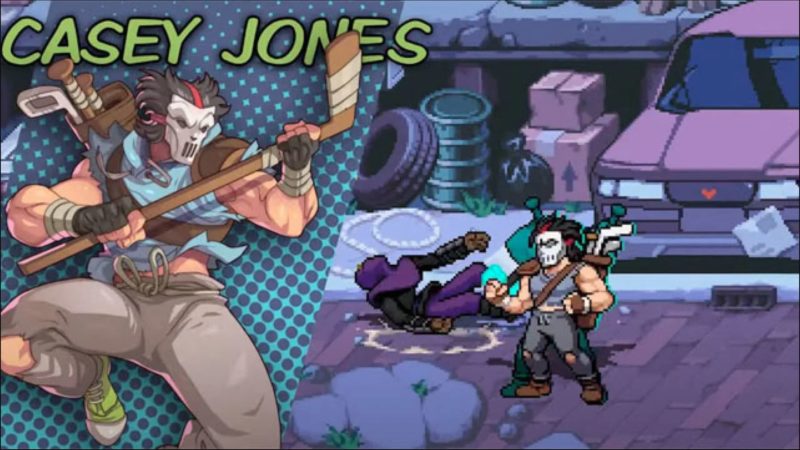 TMNT Shredder’s Revenge Unlock Casey Jones Guide – Developer “Tribute Games”, publisher “Dotemu”, and “Gamera Games” is back with the four Ninja Turtles. This time, Leonardo, Michelangelo, Donatello, and Raphael are back again and presented us with their new type of 2D Side Scrolling Action . This action-adventure game belongs to an Indie genre and it aims to deliver new experiences to the player and Teenage Mutant Ninja Turtle fans.

The TNMT Shredders Revenge Game features some groundbreaking gameplay rooted in classic time. Players will be offered to bash their way through some impressive artistic environment levels and face massive numbers of enemies. Players can choose any turtle according to their own choice. The four turtles will feature different powers, moves, finishing styles, combat actions, and abilities. And in co-op mode, you can make the team and simultaneously play with all the playable characters at a time.

This game offers you 4 Ninja Turtle characters, Master Splinter, and 1st human ally character April O’Neil. But additionally, you can also play with a character who is Casey Jones. This Character is a vigilante and also a human ally like April.

So in this article, we are going to help and guide you on how you can unlock the Casey Jones Character in TMNT Shredder’s Revenge Game.

How to unlock Casey Jones in TMNT Shredder’s Revenge Game

Unlocking this character in TMNT Shredder’s Revenge Game is very easy. You just have to complete the game’s story mode with any difficulty mode. But you have to play this entire story mode with all characters whether you are playing with your friends in co-op or playing alone. This Game’s Story mode has a total of 16 stages.

When you beat the main boss Super Shredder on the 16th level, you will be notified that you have a new playable character Casey Jones. And after unlocking, this character is also playable in Arcade mode too. Casey Jones looks dashing as a fighter and has 3 Stars range and two stars for speed and power. Plying with this character against your various types of enemies is very much enjoyable in this game.

So this was all about how you can unlock Casey Jones in TMNT Shredder’s Revenge Game. If you have something to add, feel free to comment down below. Also, keep an eye on Xombied Gaming for more guides and fixes!