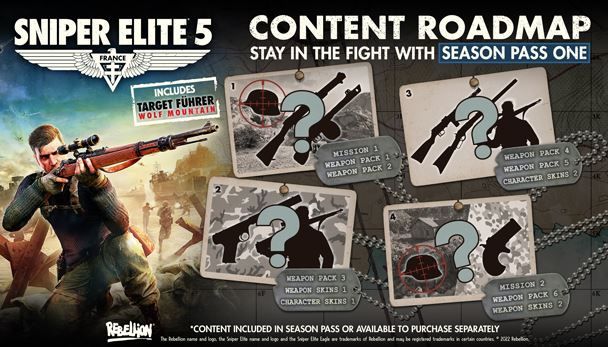 Guns in Weapon Packs – Rebellion is back again by adding a new instalment to their famous Sniper Elite Series. The Sniper Elite 5 is an award-winning game where Karl Fairburne, the protagonist, fights to unveil Project Kraken. The game events are set to happen in 1944 France. The game features a unique and authentic sniping mechanism with the enhanced Kill cam, followed by excellent visuals.

As we all know, the Sniper Elite Deluxe Edition also features the Season Pass. The Season Pass One for this game will come with new Weapon sets, character skins and maybe new missions, but that hasn’t been confirmed yet. It is important to note that the weapons and skins that are coming will not be for players who bought the Sniper Elite 5 base game.

The Season passes along with everything that comes with it, including the Wolf Mountain pack. It will be featuring new Weapon packs, weapon skins, character skin packs and most importantly, two campaign missions.

So this article will guide you on what guns we get in the new Season Pass Weapon Packs in Sniper Elite 5 game.

You can get these guns from the Weapon packs in Sniper Elite 5. Remember that you have to get the Season Pass One for the game to play or use these weapons. If you have the base game, you can buy the season pass separately.

These are the weapons and guns coming for Season Pass One in Sniper Elite 5 Game. According to the recent reports, we are unsure which version of the Winchester weapon is coming.

So this was all about what guns we get in the weapon packs in Sniper Elite 5. If you have something to add, feel free to comment down below. Also, keep an eye on Xombied Gaming for more guides and fixes!